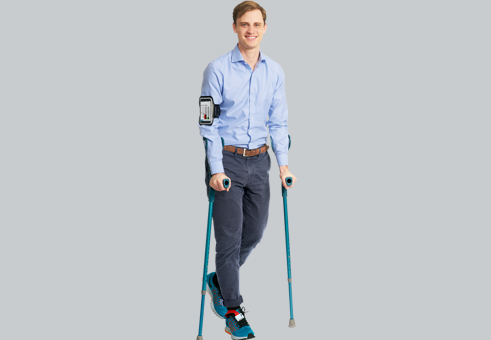 The loadsol® system measures the normal ground reaction force of the patient while standing or walking. Utilizing one flexible, flat sensor which covers the entire plantar surface of the foot, loadsol® measures the force between the foot and the shoe, regardless of which part of the foot is in contact with the insole. The loadsol® sensor is based on patented technology and due to its linear properties it also measures partial loads accurately. The loadsol® is used for applications where the capture of the total force on the foot is needed. The loadsol® does not capture the local pressure distribution under the foot. For this application novel’s pedar® system is the gold standard.
loadsol® technology has matchbox-sized electronics and communicates wirelessly via Bluetooth with a smartphone. The force values are displayed on the smartphone in real time.
The patient can also receive immediate biofeedback regarding the load on the foot via an auditory, visual, or vibratory signal. The measured data can be stored on the smartphone and to a clinic server, and additionally transferred to a computer for a more detailed analysis. Long-term measurements allow the assessment of variability and compliance with prescribed load limits after surgery. The loadsol® insole conforms well to surfaces and therefore it is possible to wear an orthotic in addition to the loadsol® measuring insoles. The electronics were intentionally not integrated into the thin loadsol® sensor not to affect the proprioception of the plantar surface of the foot, the biomechanics of the gait, as well as the function of a corrective orthotic. The miniature electronics can be attached to the upper part of the shoe, i.e. the laces. The loadsol® is available in all shoe sizes and in four versions with different sensor area layouts. The load on the foot can also be captured separately in up to three subareas. For specific applications there are additional customizable divisions and sizes available.

The loadsol® rehabilitation app was developed in coordination with large rehabilitation centers. It is easy to operate and at the same time allows for extensive display and evaluation of various parameters. This includes load monitoring with biofeedback, bipedal symmetry, balance and gait stability as well as assessment of walking and running. The progress of rehabilitation can
be documented using the measured values. The loadsol® sensor technology is also available as a dorsal pad for measurement on the dorsum of the foot. The dorsal pad can be used to examine the comfort of the shoe. To further evaluate the acquired data for other applications, the data can be exported to an ASCII file. Additionally, the Windows loadpad® analysis software offers an extensive evaluation of the loadsol® data on the computer. The measurement results can also be sent encrypted via Internet to a clinical practice server.

Walking with assistive devices after surgery: 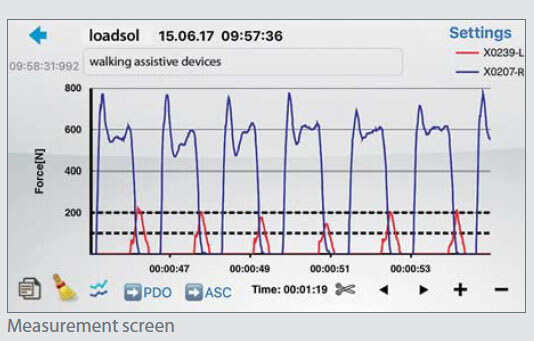 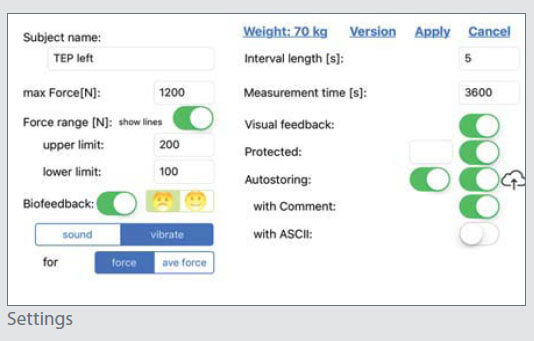 In combination with our loadsol® force insoles* the ad loadpad® is a perfect solution to detect the force on the hands compared to the force being offloaded from the feet. The monitoring of these combined forces can be important if a patient has fractures on both an upper and lower limb. Therefore, it is important for the clinician to determine the maximum force applied to both limbs and document the hand and feet loading and off-loading for improved clinical outcome. The clinician sets target thresholds for visual feedback and auditory cues which provides real-time force information.

The ad loadpad® is an accurate tool for complete assessment of normal force production. The system is simple to use and is intended for use in the clinical as well as home health care. 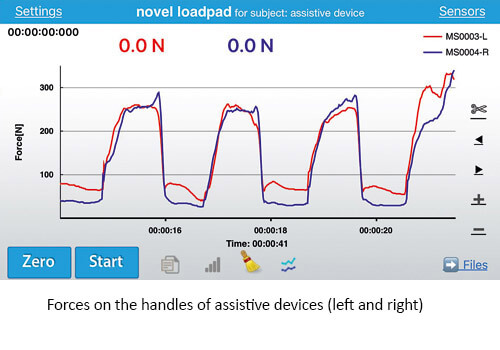 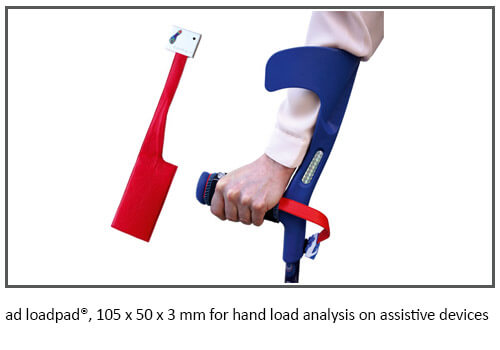